A Closer Look at the MiniDisc
User Table of Contents

The MiniDisc's audio editing capabilities set it apart from all other consumer audio formats. These editing functions are made possible by the format's User Table of Contents ("UTOC"), which is essentially a directory structure of the audio information on the disc. Though most MD users have a rough idea of what the UTOC is, there does not seem to be any public documentation of its precise format.

In light of this I thought it would be interesting to describe what I learned recently while working with a Sony MDH-10 Data drive. These drives were developed for use with special MD-Data discs but can also be used to read and write an MD-Audio disc's UTOC. Using this capability, Wolfgang Buresch (see references) investigated much of the basic information in the UTOC, though without detailing specific fields. Following his lead, I was able to get a reasonably accurate idea of the MD's on-disc data structures, which I describe below. Please note that my experiments were conducted chiefly by examining the UTOC manipulations made by a Sony MZ-R50 portable recorder, and so I make no claim that all MD units behave in precisely the ways I describe.

As described by Wolfgang in his extended length MD work, this is the overall disc structure:

The MiniDisc UTOC is an on-disc directory structure giving information about a disc's audio tracks. In use, a MiniDisc machine will attempt to read a disc's UTOC into memory when the disc is first loaded. If the machine is a recorder and the UTOC cannot be read, the in-memory UTOC is initialized to "blank" (i.e. an empty disc). Subsequent manipulation of UTOC information is done on the machine's in-memory copy. The UTOC is generally written back out to disc only upon power off or disc eject.

In the discussion that follows, it is important to understand the difference between what I term tracks and fragments. A track is the normal CD-like audio track that MD users see when playing, recording, and editing MDs. A fragment refers to a contiguous segment of audio data on the disc. Each MD track is made up of one or more individual fragments, and fragments are not generally visible to MD users (though some Sony decks allow you to see them from retry cause display mode). Fragments are typically created each time a recording begins and through editing operations (see editing operations, below).

The UTOC can be read and written by all MD recorders, and read by all MD players. It occupies several disc sectors, each 2336 bytes long. UTOC sector #0 describes the disc addresses of each track's audio information, sector #1 holds the characters in the track titles, and sector #2 holds track timestamp information. According to other documentation I've read, sector #3 contains the Barcode for the disc and ISRC for the music, and sector #4 contains Disk title, music titles and artist in ISO-8895-1 format.

On the Sony MDH-10 data drive, the UTOC is read one sector at a time with a group 1 SCSI command (ReadUTOC opcode is 0xD1). The block address given in the ReadUTOC command is 0, 1, or 2, corresponding to the 0th, 1st or 2nd UTOC sector. The data length is 2336 bytes.

The disc start and end addresses each consist of a cluster, sector, and sound group, all packed into 3 bytes. The sound group is the MiniDisc's smallest addressable unit, representing 11.6ms of mono audio (212 bytes). A sector contains 11 sound groups (2332 bytes). A cluster is an aggregate of 32 sectors (352 sound groups) representing 2.03 seconds of stereo audio; it is the smallest unit of data that can be written to a MiniDisc. In the 3 byte packing, there are 14 bits allocated to the cluster number, 6 bits to the sector, and 4 bits to the soundgroup; this arrangement allows addressing of up to 9.2 hours of stereo audio.

When a user deletes audio material, fragments representing the deleted sections are placed on a freelist. The freelist is pointed to with track #0 (which is never visible to users), and is linked together just like the fragments of the audio tracks (i.e. it appears just as if it were audio track #0).

Since the freelist is intended to hold disc space that can be re-used for new recordings, short fragments (those less than 12 stereo seconds long) are not added to it. This 12 second restriction compensates for the long seek times typical in MD equipment by allowing the shock memory to fill after each seek (see fragmentation question in the FAQ).

These short, freelist ineligible bits of space are apparently not kept track of in the UTOC. Using an MZ-R50 I found that, for example, tiny sections of unused space left at the end of a cluster appeared nowhere in the UTOC. Subsequent disc editing demonstrated that the MZ-R50 had not lost track of this unused space and would coalesce it with other unused space whenever possible. This led me to understand that the freelist is not strictly necessary; its information can be recreated by subtracting the allocated fragments from the space of the whole disc. I believe this is how modern Sony MD decks are able to circumvent "hacked" MDs with special freelists that extend their recording time (see the Miyadisc compatibility tables); the decks are able to independently validate the freelist and reject ones that are out of bounds.

The UTOC Address Sector's C structures are as follows:

See also page 10 of the JE520 Service Manual for the above bit definitions.

UTOC sector #1 contains the track titling information. Its layout bears similarity to the preceding address information sector. In this case, the user visible track number is translated via the titlemap to an entry in the titlelist. The titlelist is an array of 256 titlecell structures. Each 8 byte titlecell contains 7 characters of title information (in ASCII), followed by a link byte. If the link byte is non-zero, the track's title continues at the titlelist entry it points to. The disc title (if present) is handled like any other track title and is referenced through titlemap entry 0. 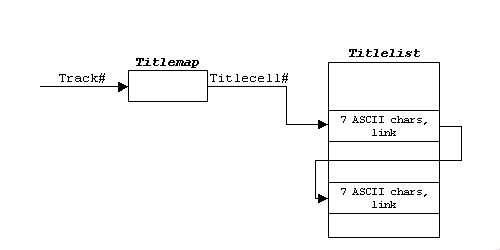 UTOC sector #2 contains the track timestamps. Its layout is again similar to the preceding two. Here the user visible track number is translated via the timemap to an entry in the timelist. The timelist is an array of 256 timestamp structures. Each timestamp contains a byte for the year, month, day, hour, minute and second that the recording started. The time values are stored in hexadecimal format, meaning that they print correctly when formatted as hex numbers. 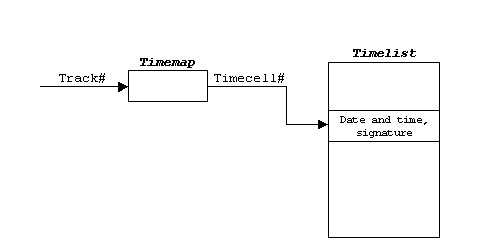 Note that a timestamp is associated with a track, not a fragment. Although there is space in the UTOC to place a timestamp on each fragment (thereby making it an indelible record of when each fragment was recorded), this approach was not taken. (Perhaps the bookkeeping operations necessary for that would have been too complex.)

One unusual member of the timestamp structure is the 16 bit signature value. This value is apparently unique to every MiniDisc recorder, and through experimentation we have determined a few of its values:

DIVIDE (a.k.a. TRACK MARK) creates a new track and (usually) a new fragment. The new fragment is made by splitting an existing one such that the two resulting fragments point at disc regions that abut each other at the divide point. The preceeding fragment remains in the existing track, the succeeding fragment (and all the fragments it links to) become the new track. A special case occurs when a track is split exactly at a fragment boundary, in this case no fragment splitting need occur. The timestamp information is also split, and the second track's timestamp is updated to reflect the new offset.

MOVE simply shuffles entries in the trackmap, titlemap, and timemap; no fragment manipulation is necessary.

DELETE removes a track and all the fragments associated with it. The removed fragments are placed on the freelist.

RECORD creates a new track and takes fragments from the freelist. When a freelist fragment is not fully consumed, a fragment consisting of the remainder (if sufficiently long) is placed on the freelist. Recorders can only start a recording on a cluster boundary, since a cluster is the smallest writable unit on an MD.

Popular MiniDisc literature talks about a limit of 255 tracks per disc, but as can be seen, the limit is actually 255 fragments. If a disc has only one fragment per track, then 255 tracks is also possible.

The UTOC title structure limits MD track titling to a total of 1785 characters (255 cells * 7 chars/cell) and 255 titles. A disc with 255 titled tracks illustrates these limitations; there would be no room on such a disc for the disc title, and there could be no more than 7 characters in any title.