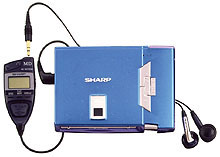 I had a Sony MZ-E40 that came in the MD-Bundle3. It was a fairly nice unit, but there were some things I disliked about it which made me want to replace it:

As for other replacements, the MS-200 is 10000Y more expensive, much thicker and heavier, and besides I don't really need a portable recorder; my home deck is much more convenient for editing and titling functions. The MD-ST60 is 7500Y more expensive and, while slightly smaller, has only 4.5 hours battery life. Sony's MZ-E50 is much more expensive, has less battery life, and might have the same output power problem (does it?). The MD-SS70 seemed like the best option.

How did I get it?

I sent mail to Nic Boyde (http://www.boyde.gol.com) to ask about the MD-SS70's power supply; he replied immediately and was quite helpful. On Saturday, I mailed him and asked for a quote on the unit; he replied with a quote of $272 USD. By Tuesday the yen had dropped against the dollar by quite a bit, so I asked for a requote; this time it was $254. I also ordered some blank MDs.

I wired the money to Mr. Boyde's Wells Fargo account on Thursday. My bank charged me $22 for the "wire transfer", but I didn't want to deal with the vagarities of the post office. They also insisted on a USA address for Mr. Boyde; I gave them the address of Wells Fargo, figuring they'd never need it, and it went through fine. Mr. Boyde wrote me on Friday to say he'd received payment and shipped the unit, and gave me a UPS tracking number.

On Monday I received a call from UPS's Louisville office; my package was in Customs, and they wanted to know what an "emm dee player" was. I told them it was "like a Walkman". They asked me "is it like a CD player?", and then told me that imported CD players had to be inspected by the Food and Drug Administration before delivery. (!!!) Needless to say, I assured them that it was nothing at all like a CD player!

What's good about it?

What's bad about it?