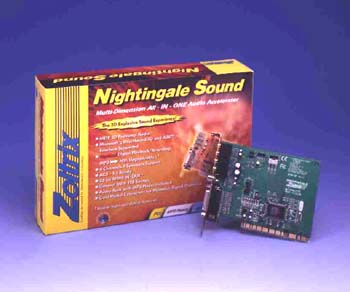 I've received numerous emails about this soundcard, so I've added some new material...

Last week my friend Eli called and mentioned that he had read an ad in the paper I'd be interested in -- a $20 digital soundcard. This little quest began earlier this summer, when I found out that there were certain soundcards that could easily be modified for SPDIF output, the digital audio signal used by CD players and MD recorders to transfer perfect digital copies. A digital soundcard with SPDIF output would be perfect for recording MP3's and other sound files from my PC to MD discs to carry about. Unfortunately, they were all cheap, no name, generic models from odd manufacturers with specific chipsets, so the exact model was very difficult.

After weeks of scouring local Toronto stores, asking at each "I'm looking for the world's worst soundcard, can I see your selection?" and examining boards for headers marked "SPDIF" or "DIG OUT", I had just about given up. Either they were missing the header itself and some crucial chip or oscillator, or I was told to look at the expensive $270 SoundBlaster Live, which I had no intention of buying-I really only wanted a card to connect to my MD recorder.

The ad my friend had found was for the Zoltrix AudioPlus 3D Nightingale card-not only with SPDIF I/O, but with a low suggested price of $29 Canadian plus $19 for the optical option board. I found one in a local clone dealer here in Toronto (A Plus Software on College, west of Spadina) for $18 and brought it home. The box was labeled AudioPlus 6400 PCI 3D v3 and was garishly coloured with numerous misspellings. It also had a number of stickers replacing the original text on the packaging.

The Zoltrix board is a half sized PCI card with few chips on it, and has the usual four connectors for Line, Front Speakers, Rear Speakers, Microphone, and a joystick port. The only special feature is that it has a nice RCA SPDIF OUT connector, clearly marked. There is a header for Toslink optical IO, which is an option. The product is billed as a 3D soundcard, with "Explosive Sound Experience" and has features like A3D and DirectX compatibility, AC3 5.1 "Ready", and "General Midi". These features weren't really on my want list, but may be useful as reference for you. It is based on the CMI8738/C3DX chipset.

I installed the board in my sister's AcerAspire P133/80 and installation was easy: The Acer's integrated monitor's audio plugs went into the Zoltrix board, as did the Acer internal CDRom audio cable. The software was easy to install (a set of drivers for Win95/98), but I decided against installing the "AudioRack" package. SPDIF features are selected in extra control panels from the Volume Control.

As a soundcard, the Zoltrix isn't half bad-previously an IBM MWave Pro (shipped with the Acer) and a SoundBlaster 16 Pro (purchased later) were in the machine and the Zoltrix actually sounds better with the Acer monitor's speakers. I was not too concerned with the quality of the analog section anyways, but the microphone and CD inputs work fine, at least to my untrained ears.

The real feature I was looking for was SPDIF. As many of you know, SPDIF, or the Sony Philips Digital Interface Format, is the consumer version of AES/EBU, the professional digital sound protocol. Many consumer products like MD recorders and CD players use SPDIF to transfer digital audio. SPDIF nominally runs over 75 ohm copper coax, but can also run over fiber optic cable, like the popular TOSlink cables and ports found on many MD recorders. SPDIF is useful for me because the cabling is cheap and easy to find: Just use a video cable. It doesn't have to use special optical connectors, and the cable can be run long distances for low cost.

I hooked the Zoltrix's SPDIF Out into my Sony MDS-JB920 MD recorder and dropped the deck into record. The board puts out a solid SPDIF signal that the '920 picks up just fine. I recorded a few MP3's using WinAmp without much trouble, it handles multibitrate MP3's (that vary from 128 and beyond) just fine. One reader asked if the board magically time compresses audio as a design flaw: As far as I can tell, recording about an hour of audio has not caused any significant changes in length that couldn't be explained by starting and stopping. The audio quality is perfectly fine, although not as much of an improvement over my already excellent analog Miro DC30plus boards line level analog audio output.

In summary, the Zoltrix was well worth the $18 Canadian -- if only for the fact that it has SPDIF. It's pretty neat for this feature -- clearly labeled, simply supported. For all the trouble others have with other sound cards, strange drivers, odd jumpers etc, this board seems relatively easy to configure. I will be buying the optical module with Toslink Input and Output -- a friend has a number of concerts recorded from his choir tour of Finland and we'll likely try digitizing some of the material and will report back with further details.

About two years ago I wrote the preceeding review of the Zoltrix Nightingale AudioPlus 3D 6400. It's a CMedia 8738 chipset based PCI audio board that happens to have SPDIF Coax Digital Out, and a header for an optical bracket for TOSLink Optical Digital In and Out. At the time, it was a novel board because it was cheap.

Two years later, and I still get quite a few emails about it. Let me try and clarify a few things about the great Nightingale board that weren't covered by the first article on Minidisc.org:

How the PC and MD Talk

In fact, the PC and MD don't really talk, at least not in any interactive protocol. The PC plays out music to the soundcard as normal-Winamp or other program drives the Windows soundcard drivers. The only difference is that the soundcard puts out a SPDIF signal in parallel with the normal analog speaker output. The MD records just like recording analog sources, except it's coming in digitally.

To send music from the MD to the PC, it's just like recording from an analog input on a soundcard-the digital SPDIF input appears as another Windows mixer source, and the MD plays along like normal. There is no device control (ie, play and forward/reverse) to the MD, it's basically audio going in one direction or the other. To change directions, switch ports from input to output.

To record to your average portable MD recorder, you need optical digital output, often known as TOSLINK. TOSLINK (TOShiba LINK) is a digital audio signal, modulated down the lightpipe as light. It just happens that this signal format is SPDIF, or the Sony Phillips Digital Interface Format. SPDIF can either go across optical cable (using TOSLINK) or copper cable (often using RCA or two pin header connectors).

Most MD portables have a TOSLINK optical input, while most MD decks will support either optical or copper, or, if you're lucky, both! Meanwhile, going from the MD to the PC, MD portables usually don't have digital output, while again, a deck offers one or both. What's better? Either is fine-it's the same SPDIF signal format. Some might say optical signals avoid jitter, but you cared, you'd be using AES/EBU. Anyways, copper connectors and cabling is cheaper, because it's your average RCA cable, so I highly recommend coax connections.

The Zoltrix by default only has SPDIF RCA copper out on the rear bracket. You have to buy a second board, which is actually a small PC board with it's own bracket and two TOSLINK connectors, one for input and one for output. This daughterboard is very hard to find-in the past two years, either people find the card or the daughterboard, but never both at the same time. The package comes with a nice TOSLINK square to 1/8" optical connector, perfect for use with a portable MD recorder.

The daughterboard also offers SPDIF copper loopthrough in the form of a two pin header connection to get SPDIF audio from a CDrom drive directly. While this is undocumented, it's likely the daughterboard directly can loopthrough this to the output without processing it.

If you're really desperate and a little technically inclined, the daughterboard isn't much more than a TOSLINK receiver and transmitter pair. You could probably make one using a little trial and error. You can probably also hack the Zoltrix board to fit another SPDIF compatible soundcard too.

Windows 2000 and XP require a new type of driver under the new Windows Driver Model. I'm not sure if Zoltrix packages them online anymore, but you can download a Windows 2000 reference driver straight from the chipset vendor, CMEDIA:

The driver is simple and clean-just turn on SPDIF from the Volume Control panel and the board outputs digitally as normal.

This specific model of Zoltrix soundcard is long gone, superceded by new models. In the years that have passed, SPDIF output for cheap is no longer that unusual. A quick visit to your local PC dealer will yield many alternatives:

NetMD completely changes the game for MD and soundcards. For recording music to MD, NetMD eliminates the need for optical digital output on the PC. However, NetMD won't allow for transfers from disc back to PC, so you still might find a need for a SPDIF soundcard to get digital input.

page for the unit.