This review is written specifically to inform callers of American Square Dance about the feasibility of using the machine for their work.

I call this device a "machine" because it is more than just a recorder and player - and because of its size. 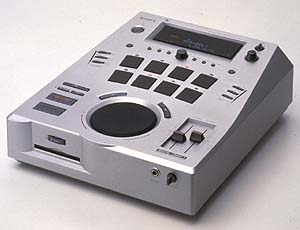 It is huge and close to being the clumsiest piece of electronic equipment I have owned. It does not look like anything else either, except maybe for some specialized CD players for DJ use.

And that is no coincidence, because it is Sony's attempt at bringing MD technology into the hands of the die-hard DJ.

The deck is packed with features which - I believe - enables a DJ to do all the tricks he used to do with vinyl records, and quite a few more. The DRE in the name stands for Digital Remix Enabler, and that is about what I know about this subject. I will concentrate on the features and properties which I believe are important to dance instructors, SD callers, contra prompters or line dance leaders.

My reference is an MZ-R3 pocket MD recorder/player that has served me faithfully for 4 years. I have also occasionally used newer MD portables, and I own an MDS-JE510 home deck.

Why I bought it

I purchased this machine in Germany for DM 1,690 (US$920), it is not available in Denmark. There are two main reasons I bought it:

It seems to be much sturdier than the tiny MD "walkmen", which definitely are not constructed for semi-professional use.

It has independent tempo and pitch adjustments, i.e. you can adjust the tempo without altering the pitch, and vice versa.

It has a "slot-in" disc mechanism, much like a computer floppy disk drive.

The connectors comprise phono connectors for analog line in and line out, two digital inputs (coax + optical TOS-link), but no digital output, a 1/4" jack headphone output with separate volume control, and a connector for a foot pedal (play/pause, rec/pause). Plus the mains connector; this unit does not run on batteries.

I miss having a digital output, and would have liked XLR connectors for line in and out, although the phono connectors are a big improvement over the mini-jacks found on portables. The mini-jacks are really shaky, at a recent festival we had to try 3 portables before we found one without problems with its mini-jack. The DRE1's line out provides a strong signal level, eliminating the need for a separate signal booster.

Its huge size means that it has huge buttons, and there is plenty of space around them. And if that was not enough, the play button lights up in bright green when you have selected a track and it is ready to play it.

Selecting and playing a track

There are (at least) two ways to select a track:

There is a "traditional" jog-dial, but unlike some found on portables, this one stays on the track until you are ready to go. And it is very nice that the track names are displayed as you move around.

In addition there are 8 very large buttons for direct track selection. You can switch between 4 banks, giving direct access to the first 32 tracks. These buttons can also be programmed in various ways to "hot start" a track or anywhere in the middle of a track. Because most of my disks contain more than 32 tracks (and because I tend to forget the "bank" switch...), I have not used these buttons much.

There are several playing modes. One of them is called "Auto Cue" and it works like this: Once you select a track, it reads over any blank (silent) space at the beginning of the track and stops. Then, when you hit the play button, the music starts instantaneously (or after a configurable delay). I have found this feature less useful than I had anticipated for live performances, mainly because of the noise present on tracks recorded from vinyl records. Although the level for "silence" detection may be configured very precisely, it is impossible to set a level that fits all records. Believe me, I have tried with hundreds of tracks, all recorded from almost new records with a high quality turntable. This feature surely works best with recordings done from CD's, or with pre-recorded MD's.

Instead I have used the Auto Cue feature to precisely find the true beginning of each and every song, and then simply cut out the entire "needle scratching". Now, when I select a tune, I quickly hit the play button twice. The first hit starts playing; the second sets the unit in pause mode. When I am ready to start, I hit the play button again, and the music starts immediately. I like being in 100% control of when the music actually starts.

All the tunes I use for patter calling are divided into 3 tracks: A short intro, the main part, and an ending. Well into the main part, I let the player repeat it until we are through, and then I let the ending play.

The DRE1 has an interesting and useful way of setting repeat mode: It has two buttons, one activates "repeat mode", the other sets "single play mode". Pressing REPEAT alone repeats the entire disk. This is mainly useful for background music during a dinner etc. Pressing SINGLE PLAY alone lets the current track complete, and then stops. This is very useful for singing calls and line dancing, because you do not have to worry about stopping the player yourself. Pressing both the REPEAT and SINGLE PLAY repeats the current track indefinitely, this is the mode to use for patter calling.

What I have most trouble remembering is that the various playing modes are "sticky", in the sense that they are not cleared when the STOP button is pressed, nor after a disk change. Even after the power has been off, it remembers the previous playing mode! It takes some time getting used to.

The display is in a class of its own. It has room for both timing information and a long track name simultaneously, along with various indicators of playing modes etc. The time is shown with a precision of one "frame" = 1/86 of a second. This is really useful during editing. The display is very large and bright, making it easily readable in even the darkest room. However, it cannot compete with a direct sunlight, as I discovered at an outdoor demo!

I do all my SD recordings on the JE510, which is permanently hooked up to my home stereo and a high quality turntable, so I have not used the DRE1 very much for recording.

Unfortunately the DRE1 cannot record in mono, which of course is less of a problem for me. Fortunately it has no problem playing and editing disks recorded in mono.

It looks as if Sony is experimenting with strategies for when the TOC (Table Of Contents) should be written to the disc (or they cannot make up their minds, or different development groups do it their own way): On my MZ-R3 the TOC is updated as soon as I press the STOP key. On my JE510, the only way to update the TOC is to eject the disk. On the DRE1 there is a special key combination to update the TOC, but it will also be updated before the disk is ejected.

Here I also discovered that this machine has an elephant's memory: One evening I forgot to update the TOC before I turned the system off. The next morning I turned it on and ejected the disk, but it politely told me to wait a little, because it first had to update the TOC on the disk!

This is an area in which the machine really shows that it is close to be a professional grade product.

Without going into details I will just say that the precision with which you can edit your disks seems limited only by the MD format, not this machine. Every edit operation (divide, combine, A-B erase etc.) can be done with 1/86 of a second precision, and the display clearly shows what you are about to do.

There are numerous parameters that can be set, controlling the specifics of many functions. Even such a thing as the rehearsal segment duration used during editing operations can be modified.

The pitch and tempo adjustments are continuously in effect, operating as you adjust them. I do not think it is possible to perform this kind of "magic" without introducing some distortion, at least not in real-time with current technology. I am not sure how I should rate the effect's quality. I feel it is "acceptable" for my use in most situations. One should remember that the "traditional" linking of tempo and pitch is also a distortion, if what you really wanted was to adjust only one of them. I find that if I stay within, say, +/- 8%, the results are OK even if I adjust both at the same time. If I only adjust one of them, I find the result acceptable in most situations all the way to +/- 12%. The distortion gets much worse if I adjust both pitch and tempo at the same time in the opposite direction of what would be "natural". In that case I can provoke the "wow" described as a bug in the software (ref. MDCP MDS-DRE1 entry), but only if I go to the extremes.

I apologize for not being able to describe all the features of the machine (looping, cueing, scratching, backtrack recording etc.), but what I have covered is about how far I have come in using the DRE1.

I surely would have liked to see it in a handier format, but it is the closest I have seen to an "ideal" caller-player. I have decided to bring it with me to all the dances I call, simply because it makes my job easier when I am on stage. Yes, I am a sort of a "techie", but only to the extent that the technology helps me and/or the dancers.