The MDX-C7900 is Sony's latest car MD receiver and provides MD playback, 20 FM and 10 AM presets and will control a CD or MD changer (or several if an optional XA-C30 source selector is used). An included "Rotary Commander" (a wired remote) can be installed in a convenient location to provide easy access to almost all the unit's functions. One of the unit's interesting features is "Best Tuning Memory", which automatically sets the station presets to the strongest stations.

I installed this unit in a Honda, where it will erect the antenna when the radio is in use, and use the car's illumination signal to dim its display. It provides 17 watts (continuous, average) to each of 4 channels and gives clear sound at loudness levels above those I normally listen at.

One nice feature of cassette is that it retains its playback position when you shut the car off. Happily, the C7900 does this too; when you start the car again, it resumes playing the MD from where it left off (however any transition from ACC to the ON key position or vice versa causes the unit to go through a lengthly on-off-on sequence of its own).

The unit is equipped with a detachable faceplate, and though it does not contain a unique key, it does make the remaining indash equipment look quite anonymous and unappealing when it is removed.

The unit has many user settable options. These are: 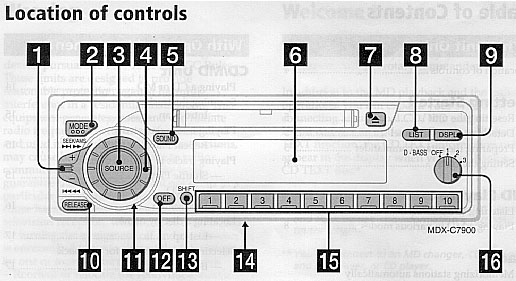 The main unit's button layout is workable, but fails miserably if you're hoping to keep your eyes on the road while making adjustments. The main knob (4) controls volume and is easily found, this is sensible. However, it is also used for L/R balance, F/R fade, treble and bass. These functions are scrolled through in round-robin fashion by repeatedly pushing the SOUND button (5). Unfortunately you can't count button pushes, since the scroller does not start at the beginning, but rather at the last one you adjusted, so you need to to be looking at the unit to tell when you've got the function you want.

MD or Radio operation is selected with the SOURCE button (3), which also switches the unit on. In RADIO mode, the MODE button (2) selects FM1, FM2 or AM. The small lever (1) to the left of the main knob seeks up or down through stations or tracks. It works reasonably well, except for one nit. When you want to set the radio to a specific frequency, you must hold the lever (rather than mometarily pushing it, which seeks). After a second or so, the frequency climbs or falls continuously until you let go. The problem is that it is hard to go up or down just one frequency step at a time. Hold it too long and you've passed it, hold it too short and it thinks you want to seek to the next station. If you enjoy ``DX-ing'' for distant stations on a long drive, you'll find the tuning control cumbersome. One novel feature of the seek lever is that when playing MDs, if you skip a track or two by hand and then hold the lever, it will start skipping tracks continuously rather than going into scanning (i.e. high speed) play/review mode.

The user settable options are buried in sub-sub menus beneath the SHIFT button (13). After pushing SHIFT, some station buttons (15) have tiny illuminated menu entries above them: SET UP (station #2), PLAY MODE (station #3), (and if in MD mode, additionally): REPEAT (station #6), and SHUFFLE (station #7). (SHIFT mode is quite sticky by the way, unless SHIFT is pushed again to return to normal mode, the unit will remain in SHIFT indefinitely, even after a complete power cycle from the ignition switch!)

In SHIFT mode, the SET UP button (station #2) cycles through functions to set: the 12 hour clock, dual info ("D.Info") mode, the button backlight color, the dimmer mode, the LCD contrast, button beep/no-beep mode, the orientation of the remote control (left or right handed), and the automatic scrolling ("A.Scroll") mode. When using MDs, the PLAY MODE button (station #3) controls only the INTRO mode (which plays the first 10 seconds of each track and is cancelled with a tap on the seek lever -- a nice touch), however in RADIO mode it sets Local/DX station search, mono/stereo reception, and Best Tuning Memory (in AM mode, the mono/stereo option is gone). The REPEAT button (station #6) cycles between REPEAT 1 and REPEAT OFF, however even in REPEAT OFF my unit always seemed to be in REPEAT ALL mode, seemlessly going on to track 1 after finishing the MD. SHUFFLE (station #7) cycles between SHUFFLE 1 and SHUFFLE OFF.

The LIST button (8) can be used to name CD tracks or radio frequencies. Although I didn't try it on CDs, it works well for naming radio stations, continuing to associate a frequency with a station name even if the station is no longer on one of the 10 station selector buttons. The naming is done by holding the LIST button in for over 2 seconds, after that the main knob is used to select letters, numbers or symbols while station buttons 1 (<-) and 4 (->) move the cursor left and right. This is a fun activity to do in stop and go traffic, and I am willing to bet there will be a few police reports which mention this unique feature of the unit.

Aside from the human interface issues I address in the final section, the manual states that SHUFFLE mode will shuffle across discs in a CD changer, but shuffles only within one disk with MD changers.

I purchased this unit from Carmedia for $261 plus $20 shipping, it was delivered in about 2 weeks. I notice they are now selling the unit for $269 plus shipping, but it's still a good deal compared to other places I see charging $500 for the MDX-C670. After I pulled my dash apart and tried installing the unit, I decided that buying the Crutchfield adapter kit would be prudent. The original factory radio connects to the car with a big plug from the wiring harness. The MDX-C7900 comes with a special plug that fits into the unit and has a spray of wires coming out that are meant to be spliced into the car's wiring harness. Crutchfield provides a wiring adapter with a socket specifically made for the plug on my Honda's wiring harness (the Crutchfield part is a bargain at $9). Using the Crutchfield and Sony supplied connectors I was able to easily splice together a small adapter that plugged between the Honda wiring harness and the MDX-C7900 that carried all the signals and power except for the antenna. It's hard to imagine a much neater connection.

For its mechanical installation, the MDX-C7900 uses a DIN mounting bracket. This is a nice modular solution to mounting car audio equipment and it seems once you have a DIN mounting receptacle it's pretty easy to pop audio equipment in and out. Unfortunately the Honda doesn't use this system and there would have been considerable work required had it not been for the Crutchfield DIN installation kit. This was $10 or so, and I recommend using it. It includes a custom plastic facia that snaps neatly into the dash opening left after the factory radio is removed. The metal rear interior bracket in the kit wasn't quite perfect, having a small error in the alignment of screw holes, but I was able to improvise with a cable tie strap. The Crutchfield electrical and mechanical kits cost about $25 in total (including shipping) and if you are doing the installation yourself it is money well spent.

I have not yet found a good location for mounting the Rotary Commander, and so cannot comment on its useability.

The unit sounds fine at moderate to loud volumes, hasn't skipped or misperformed at all, and has a display that is readable even in direct sunlight. However, I feel that in terms of human factors, the user interface is a botch. For example, ``old fashioned'' car radios had a button on the front to control FM mono/stereo reception, something that is reasonable to place close at hand. On this unit, you must press SHIFT, then press PLAY MODE while watching for MONO to appear, then press station #4 (->) until MONO OFF appears. That's 3 different buttons, 2 of which you have to push while watching! And there are other oddities, such as the fact that the MD REPEAT and SHUFFLE modes are buried under the SHIFT and station select buttons, even though the front panel MODE button would have been perfectly suited for the normal (not to say standard) REPEAT 1/REPEAT ALL/SHUFFLE arrangement that portables use. In fact the MODE button is used only in RADIO mode and lies deactivated when MDs are played! Finally, a whole 4 position rotary switch is given over to controlling the D-BASS setting (a function I will probably never need), this would have been ideal for selecting which setting the main knob adjusts. In summary, I must say that even though the unit sounds fine and performs well, Sony could have put more effort into designing the controls, especially in terms of minimizing the degree of visual confirmation required.