Review of the Sony Minidisc Bundle3

The Sony Minidisc Bundle3 consists of two components bundled together along with two 60 minute blank minidiscs. The central component of the package is a minidisc deck (Model MDS-JE500) which has record/play capability with both digital and analog in/out jacks. The portable minidisc player (Model MZ-E40) cannot record. The concept of the bundle is to provide the user with a package for recording music that can be listened to at home as well as on the go with the portable player. Accessories included with the recording deck are two RCA-type stereo cables and a rather elaborate remote control. The player comes with a set of open-air headphones (Sony MDR-24) and a snug-fitting leather pouch with slots to hold the player in place on one's belt.

This recording instrument was designed to allow the user to perform complex recording functions with minimal confusion. The unit itself has a simple, elegant "black box" design, but is suprisingly small and light for a home audio component. I'm sure Sony could have made it much smaller if they wished. The design and controls follow a logic which is easy to learn and understand. The instruction manual is clear and concise. I recommend that it be read before using this unit. Although many users will probably be experienced with data storage and management on a computer, they may be pleasantly surprised (as I was) to suddenly have all the inherent advantages of digital technology suddenly available for home audio recording. Want to erase a track? No problem, just enter the command and it's instantly gone, as if you were trashing a file on your PC. You can even change your mind and recover it, as long as you haven't ejected the disc or recorded over it. You also have the capability to name each track and name the disc itself, although the labeling process is a little tedious with the available controls. And because you are recording on media with random access capability, you never have to rewind. Using this machine may even start to change your concept of what music is. Music is handled like a file in a computer - and is more accessible and more manageable than ever before.

When inserting a minidisc, the machine grabs and loads the disc in the same way some computers handle diskettes. The display then reads "WELCOME" as it reads the minidisc directory. Press the record button and input signals now register on the stereo LED amplitude meters so you can adjust the gain. Sony has eliminated the ability to individually adjust the left and right channels, providing a single gain knob that controls both simultaneously. While there is only a single recording speed available, the recording time can be approximately doubled if you record in monaural mode. After pressing record, the machine enters record-pause mode and can remain there indefinitely. At the same time, it assigns a track number to the recording session. After recording begins, when recording with digital input, new track marks are read along with the audio information from the CD. This way you can record a CD and the track divisions on the minidisc will match the track divisions on the source CD. But when recording with analog input a new track number is marked when a low audio signal is detected that persists for at least two seconds. This automatic track marking function works nicely, but on occasion it may assign extra track numbers to a single piece of music that contains very quiet passages. However, this is not a problem since the recording itself is continuous and track marks serve as a tool to identify and map the recorded music. After recording, tracks can be combined, divided, moved, or erased with simple commands - a process which I found to be fun and is completely unique to the minidisc format. For example, if you are recording a set of tracks to play for a party, you can edit out the periods of silence between tracks by splitting them from the music and then erasing the silent sections. Sony has developed an editing feature that uses the automatic music sensor (AMS) knob for fine positioning, using this you can move edit points in 60 ms increments, making it possible to end a track just at the last chord, then repeat the process at the start of the next music selection so it will begin precisely on the first audible note. With the edit features, it's possible to produce music programs where the tracks seamlessly merge with one another without artifactual noises or distortions which would normally be present when using analog tape.

The MDS-JE500 records music which to my ears is indistinguishable from the original source. I listened to classic, reggae and jazz works recorded from CD on the analog input. Speaking qualitatively, in every case the minidisc copy contained no distortion and did not sound different from the source. I did hear differences on the first consumer minidisc players that were introduced, but Sony has now refined the ATRAC coding algorithm to a point where the user will not hear perceivable differences. As expected, the specifications for the MDS-JE500 are impressive. The frequency response is 5 - 20,000 Hz + 0.3 dB. The signal-to-noise ratio is over 96 decibels. There is no wow or flutter. This makes the minidisc an attractive medium for archiving out-of-print vinyl LPs, reel-to-reel tapes, and music recorded on other older formats. But beyond all the advantages of digital recording, the real power of the minidisc is the capability it gives you to listen to source-equivalent recordings virtually anywhere. 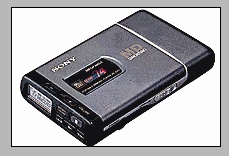 Imagine a box the size of a calculator (OK, say two calculators taped together) in which you can plug your headphones and hear music with the same fidelity as your home stereo. This is the MZ-E40. Although a portable CD player offers the same level of listening enjoyment, it is not nearly as portable nor can you listen to your own music mix on one. The MZ-E40 takes music portability into a new dimension, allowing you have the music you want when jogging, doing aerobics or a free-weight workout, skiing, or any other high-energy (but dry) activity in which portable CD players would definitely impede your performance. The controls and display of the MZ-E40 are all at one end with a few less-used controls located on the back. The vertical design of the MZ-E40 is such that when operating it you may look a little like Mr. Spock adjusting his tricorder. You can precisely control the volume with buttons that make adjustments in about 5 dB increments. Although the maximal volume level is definitely not as great as with most portable audio components, it is certainly loud enough to satisfy most persons who are not unconcerned about preserving their hearing. Sony has included a switch selectable automatic volume limiting system (AVLS) that keeps the user from being able to set the volume above a predetermined and unchangeable level which they apparently consider to be loud but safe. While I appreciate the concern of Sony for my hearing, I have not yet found this switch to be of much utility. The amplifier includes Sony's Megabass circuit, which can be switched on from a control on the back. One can move from track to track by pressing the double-arrow marked buttons or move within a track by holding down on these same controls. A switch on the back of the unit allows you to shuffle the tracks, play a single track repeatedly, play the minidisc repeatedly, or simply play the minidisc once in the order of the numbered tracks. The display shows you the track number, the title, and the playing time. The unit is powered by two AA batteries or by an optional line transformer, which can charge batteries in the unit as well. Playing time is limited to about three to four hours with the batteries. I strongly advise anyone who buys this player to also get a set of rechargeable batteries and a charger in order to avoid spending a small fortune on disposable batteries. One minor incongruity with the otherwise flawless design of the two minidisc components reviewed here is that for some reason, Sony has placed the spring that normally contacts the negative end (flat end) of the battery on the side that contacts the positive end (nippled side) of one of the two battery slots. But even this feature starts to make sense on further reflection, when one realizes that this allows you to insert both batteries easily from the same side. This approach illustrates how Sony has paid attention to even the most minute detail in the design of these audio components.

The minidisc itself looks like a transparent diskette in which a miniature CD has been placed. It measures about 70 mm on a side (a little less than 3 inches) and is roughly 4 mm thick. Two sizes of recordable minidisc are available, one with a recording time of 60 minutes (such as those included in the bundle), the other providing 74 minutes. Datawise, minidiscs store about 140 Mbytes of information, using magneto-optical recording technology to produce a recording much more resistant to stray magnetic fields than any kind of magnetic recording technology, including DAT. Unlike a computer diskette, you can't open the casing and look directly at the enclosed minidisc. Apparently, the minidisc is too vulnerable to dust and scratches to allow direct exposure to the environment. However, if you hold one up to the light you can see a beautiful rainbow, similar to what a CD produces. But apart from the esthetics of the medium, the minidisc is so small that you can easily put 5-8 hours of digital music in your pocket as you take your minidisc player along with you on your adventures.